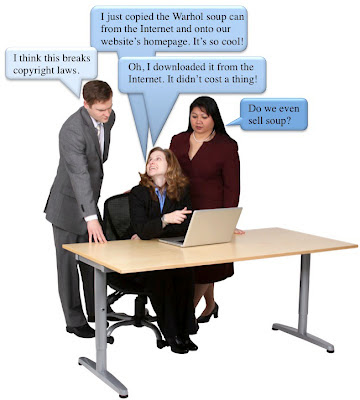 Rear Admiral Grace Hopper, known for developing the first compiler for a computer programming language as well as having an extraordinary wit, said, “It’s easier to ask forgiveness than it is to get permission.”

What she meant was to take your ideas and run with them. Don’t wait for someone to give you permission to do what you know is right or create the next great innovation. Unfortunately, many people apply Hopper’s quote out of context. I’ve read discussions lately on several forums about downloading images from the Internet to use on websites and other marketing materials. Some believe these images are part of the public domain once they are uploaded to the Internet.

And this belief can lead to costly consequences.

Recently, a fellow writer downloaded a photo from another website and used it on her blog, which has less than a thousand views a month. A few weeks later she received a cease and desist order from a lawyer representing the photographer who owned the rights to the photo. Immediately, she removed the photo from her blog and apologized, pleading ignorance because she didn’t understand copyright laws regarding images found on the Internet. However, her apology was not enough, and the photographer sued her for copyright infringement. She was found guilty and had to pay several thousand dollars to the photographer—in this case, asking and paying for permission would’ve been much cheaper and easier.

Although I feel sorry for my associate, I do understand the photographer’s point. He had spent a lot of time and money perfecting his craft and creating this photograph. His living is made off of the sale of his photographs. Every image used without his permission is a loss to his business.

Below are two important terms regarding copyright that are many times misunderstood:

Fair use mostly applies to the citation of written works, so I would recommend contacting the owner of the image and asking permission before thinking that fair use would apply to your instance and find out how attribution should be made. In my husband’s book, Do-It-Yourself Billion Dollar Graphics, he included several images by other designers and received permission to include them in his book. He even asked Google for permission to use a screen shot of their interface as a sample of good design.

Attorney David L. Amkraut wrote an article, The 7 Deadly Myths of Internet Copyright, which provides an essential overview of copyright law. I highly recommend reading his article and sharing it with others to educate yourself on the law before either you or your company use any Internet images.

Now let’s review the difference between royalty-free and free graphics and how nothing is really free in life—as well as on the Internet.

Royalty Free
Back in the olden days of graphic design, you had to pay thousands of dollars for a photograph. You would interview and hire a photographer (if you didn’t have one on staff), find models and have them sign release forms drafted by your lawyer, and scout locations. You’d spend at least a day shooting and then wait days if not weeks to receive your final photographs. Because, unlike today, not everything was digital and it took time to develop and print photographs. (How did we even manage it? Oh, the horror of waiting for something!) After you received your long-awaited images, your whole team would debate over which photograph had the best lighting, clearest image, and a model who didn’t have something stuck in between her teeth. In the end, your boss might decide they really wanted a brunette and not a red head and the sight of the water in the background made him a bit seasick, so you should photograph her in the middle of a park instead.

So the process began again …

Now websites like Getty Images, Fotolia, iStockphoto, and Dreamstime (several of the most popular sites) have millions of raster and vector images of models of every variety and in many unique locations available for immediate download starting at several dollars an image. Many of these sites also offer stock videos and music.

These stock image websites pay either an upfront fee to photographers/designers to sell their images on their site or pay the artists royalties based on the amount of downloads they sell. Photographers are required to submit model release forms for any photographs containing people. These websites have already paid the creators and are legally ensuring you are safe to use the image. For the price you pay for the image, it is a fantastic deal. You don’t need to pay any royalties to the creator, hence the royalty-free label.

Most sites will have a standard usage agreement listed on their site. For example, Fotolia has several options for downloading and using their images and states on their site that their royalty-free license “allows you to use images in your projects without limitations on time, the number of copies printed, or geographical location of use.” The price changes based on resolution, size, and usage. You will pay more if you are placing the image on a T-shirt being sold at your shop than if you were using the image on a sign advertising your T-shirt sale.

The one huge taboo with a royalty-free license is reselling the image as is.

Another license offered by Getty Images is a rights-managed license. You will pay a lot more for this option from several hundred to several thousand dollars. However, the images are magazine quality, and you are paying for exclusivity for either the duration of your campaign or product launch (up to five years). This solves the issue with using these royalty-free sites where any of your competitors could place the same image on their website or in their advertisements. Talk about a breach of brand identity!

Free Images
I am always cautious about downloading free images from the web. Often, the images are not high enough quality to be used as is and definitely not good enough to be used in print materials. If you’re lucky, a professional photographer is offering free samples for self promotion. Though most likely, you’re getting an image from someone who is far from professional and not using high-end equipment. Remember, you get what you pay for … or don’t pay for as is the case with free images. Plus, free images may come with stipulations that they are not to be used in printed materials or distributed widely. Be extra careful how you use the free images, if they don’t have a rights of use listed on their website.

I have come across a few sites that offer free images and list their licensing agreement. This is not an endorsement of these sites but an example of where you can find free images. I suggest you carefully read their rights of usage before you download and use their photographs/graphics:

This year, I decided to get focused and organized and figure out what my purpose…

Superheroes Are for Adults Too

When I tell people that I write superhero-themed romance, many will respond, “Oh, you must…