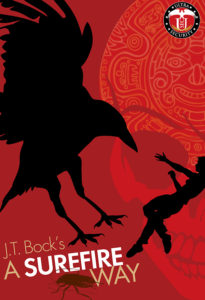 Bad guys should never be this hot, Surefire thought before she slipped on the crossbeam hanging high above the warehouse floor.

Her next thought, she vocalized. Repeatedly.

She was running along the rafters, jumping from beam to beam in close pursuit of Raven—the annoyingly hot thief—when her knee gave out. Her outstretched foot missed its landing by inches.

Time stopped. Her stomach lurched and her heart screeched to a halt. For a nanosecond, she seemed to float. But that was only an illusion.

She was falling. Fast. Her heart pumped out a last-ditch beat. She flailed her arms and stretched her upper body, groping for the next beam.

“Oof!” Her chest caught the edge, knocking the breath from her lungs. She wrapped her arms around the beam and hugged it tight to her now throbbing chest.

Surefire looked down at her feet, dangling forty feet above the floor below.

“Need help?” Raven called out from a few beams over.

Surefire’s mouth fell open. She must have misheard him.

Raven jumped, as if on springs, from crossbeam to crossbeam back in her direction. He stopped on the beam across from her and stood with his head cocked, waiting, it seemed, for her reply.

Surefire’s gaze trailed up his body from his rock-climbing shoes to his rock-solid abs.

No, she decided, a transhuman baddie needed a bizarre deformity—metal teeth, yellow skin, neon eyes, a joker face—something. Not a second-skin black suit that showed off the body of a Grecian athlete.

It was way too distracting.

Not that she was distracted one bit. She was an UltraAgent—a trained law-enforcement professional. She was always in control and always focused, and she always completed her mission. In this case, capturing the thief directly across from her.

Her falling had nothing to do with being distracted. Her bad knee had buckled. That was all.

His eyes locked on hers from behind the two holes in his Zorro-like mask, and he asked again, “Do you need help?”

Under her own mask, she blinked, registering his question. Did he think she was an idiot?

Surefire repositioned her arms for a better grip. Anger now replaced her fear. “Isn’t this the part when you run away? Or toss me to my death?”

“I can’t and won’t have blood on my hands,” he replied.

“Glad you have some principles. It’ll help you in court.”

He shook his head as if she didn’t get it. “I can give you a hand—”

“Stay where you are.” She emphasized each word so he didn’t mistake her meaning.

Never moving her eyes from his, she hauled herself back onto the beam, inch by painful inch. Swinging her leg over, she pulled herself up onto unsteady feet but remained in a squat for better balance. She took a deep breath then winced as pain sliced through her ribcage.

If Raven noticed she was hurt, he didn’t give any indication. He casually stood on the beam across from her. Over his shoulder, he held the burlap sack containing the statue he had stolen from the museum.

Surefire raised her right arm and aimed the small dart gun attached to her wrist. She concentrated on keeping her hand from trembling as she locked on the masked space between his eyes.

She couldn’t shoot him this high up off the floor. He’d fall, and the priceless artifact he had slung over his shoulder like a bag of dirty gym clothes would crash to the ground.

Surefire lowered her gaze, and the bastard grinned.

“You okay?” he asked, not fazed by the weapon pointed at him.

He snorted as if he didn’t believe her. Her finger tensed on the trigger button hidden in her palm.

“The police and the FBI will be here any minute.” She swallowed to strengthen her voice. “I suggest we climb down and—”

His lips puckered into a kiss before he dropped onto the concrete floor as if it weren’t a forty-foot fall but a leap off a balance beam.

Not hesitating again, she flicked her wrist toward the ground and depressed the trigger.

She inspected the tiny dart gun, shook it, and tried again.

*As an Amazon Associate, J.T. Bock earns from qualifying purchases on the above Buy on Amazon link.