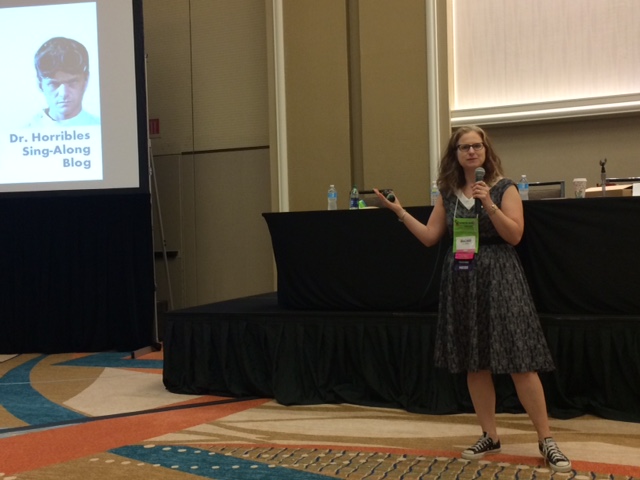 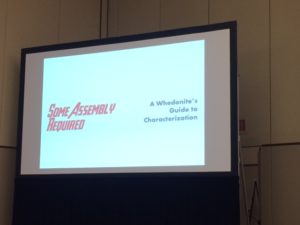 At the end of July I gave a presentation at the Romance Writers of America (RWA) Conference. Close to a hundred writers attended my workshop. It was the most people I’d ever taught without my co-presenter and co-creator, author, Kate Johnson. Attendees gave me hugs after. They met me outside the room to chat about what they learned, and some emailed me to tell me how much they enjoyed the presentation. They were excited to see this subject presented in a thoughtful way. They loved dissecting and learning about writing techniques by one their favorite pop culture writers.

When Kai Cole, Whedon’s ex-wife, published her heart-wrenching piece about the end of their marriage, I was in shock. I was sickened over not only the multiple affairs Cole said Whedon had had but over the way she claimed he didn’t take responsibility for his actions. She stated that he manipulated her emotionally. He used his relationship with her to further his career and shield his actions. While touting his feminism in interviews and con panels and receiving awards for his “feminist” work, Cole’s account is that he treated the woman closest to him with disdain and gaslighting her regarding his actions. Based on Cole’s statements, it’s no wonder she was diagnosed with complex PTSD.

As of writing this piece, Whedon’s official statement was that he wasn’t going to respond to her accusations, which he claimed contained many inaccuracies and misconceptions, in order to protect his ex-wife and children. I usually wait to hear both sides of the argument before I form an opinion, and I will update this blog and my opinion with any new information that comes to light. There have been rumors of his infidelity in the Whedonite community, which were unsettling enough for a man whose public persona showcased his solid relationship with his wife who also partnered with him on projects.

By writing this piece, Cole has exposed herself, opening up a deep wound still healing for all to see. She has so much to lose from writing about her relationship with him. She’s opened herself up to people dissecting her every word, calling her a liar, questioning her motives. With his Hollywood influence, Whedon has the power in this situation. Although I have no doubt this will hurt his relationship with fans—the fan site Whedonesque closed after the story broke—he most likely won’t want for work. His films make money, and that’s what matters to this industry. He’ll recover.

I’ve read comments that claimed how fans shouldn’t worship Hollywood artists and celebrities. I didn’t worship him, he was only a man after all—but I did respect him. I respected him for his creative intelligence, his writing style, his stories, his work ethic. Then when I saw him interviewed and others interviewed about him, I respected him for the deep relationships he’d forged with his cast and crew, his work with women’s organization, his appreciation for his fans, and his strong marriage. Enjoyment of his stories inspired me to work with Kate to create our workshop; his caring and thoughtful public persona made me excited to teach about him to other writers. (For a more detailed analysis, the Daily Dot has a thoughtful piece on why his diehard fans feel betrayed.)

I will continue to learn from the series and movies he has written. They are part of pop culture cannon. They were a product of not only his imagination but many others (writers, actors, producers, designers) who elevated the stories with their talent. These stories have inspired me and filled me with joy for over 20 years. I won’t erase or ignore their influence because the creator is not the person he pretended to be. As many commented on Twitter, the art and the artist are two different entities. I still respect his work and the positive impact many of his storylines and characters have had on his fans. It is possible to enjoy one and not like the other.

And it’s also possible, as writers and creators, to learn from this.

I discovered my favorite color when I was four years old. During summer break from…