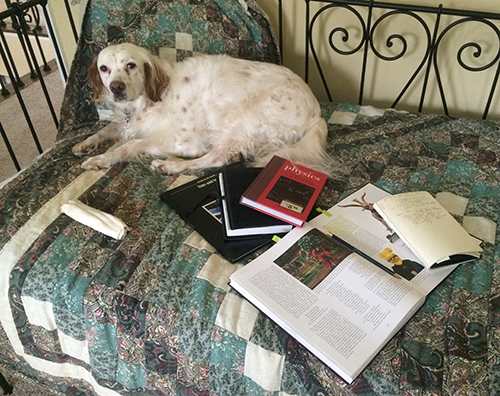 While Dama X, the second UltraSecurity book, is with my editor, I’ve been researching TimeTrap’s story—tentatively titled, Mistress of Alternate Routes. I’m a bit nervous to tell her tale since she has a master’s degree in physics and knows a bit about time travel. These are far from my areas of expertise. So, to understand her character and power, I will be delving into the dark, scary abyss—otherwise known as physics. **cue scary organ music**

Fortunately, a dear friend and comic book aficionado is a high school physics teacher and is patiently answering my questions. I even picked up a book on physics, which gives a basic overview and explanation of the various theories so my head doesn’t explode from theory overload. In the photo above, even my dog Woody is wondering what I’m doing with a physics book. Or, it could be he’s confused about the other books on the paranormal and chaos magic. Or maybe he’s wondering why I’m working and not snuggling him. Ah … he’s an enigma, that one.

What I’m most excited about is having a fully plotted story. Normally, I am a pantser. I write by the seat of my pants and then have to rewrite and then rewrite again … and you get the picture. This time I wrote half the book during the month-long, book-writing stress-fest called NaNo, and I decided to plot where I’m going before writing the second part. I created a flow chart detailing the events from beginning to end. 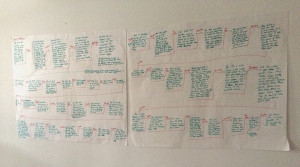 To create my plot, I used a technique taught by the South Park creators, Trey Parker and Matt Stone. It’s the “Therefore … But” plotting technique. One action causes another action to occur and so on. The idea is that each scene moves the plot forward. This technique ensures each action is necessary and drives the conflict. I’ll let Parker and Stone explain it:

It’s an interesting test to apply next time you’re reading a book or watching a movie. When you feel something is lacking try breaking down the scenes to “Therefore … But” and see if it passes.

Now that I think about, isn’t life a series of “therefores” and “buts?”

When I was a teenager, I didn’t get Shakespeare. I groaned aloud in class when…