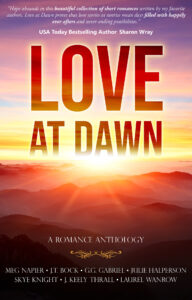 Isabelle fell in love with him before she had ever met him.

It was his painting that first captured her heart. The earthiness of its oil colors—golds, greens, and browns—and the sunlight playing across the subject’s face as she bent over and craned her neck to look out an opened window. The painted sunlight was so rich and bright, it appeared to illuminate the dark city sidewalk where Isabelle stood in front of the gallery. On instinct, she withdrew into the shadows, afraid the light would burn her if she stood too close.

Yet, Isabelle remained transfixed. She continued to stare at the painting through the gallery’s window, cleaned to a clear perfection. She marveled at the life the painter could breathe into the subject, and she wondered if he could breathe life into her as well. Merely gazing at the painting aroused feelings she’d considered as dead as the rest of her. She wondered what meeting the artist would be like.

She must’ve been standing in front of the window too long because a woman with burgundy hair and matching lips opened the door to the gallery and walked outside to stand next to her.

Isabelle sidled away from the woman.

“You’ve been staring at this painting for a time,” she said to Isabelle while keeping her focus on the art. “He’s a superb artist. Same style as the masters: Vermeer, Caravaggio, Botticelli, DaVinci. You won’t find another modern artist who can capture the Renaissance style with such authenticity.”

The art dealer paused for Isabelle to comment. When she didn’t reply, the woman took off her black horn-rimmed glasses and regarded her. “You must be a fan of the masters.”

“Yes.” Isabelle hated speaking with art dealers. Their chatter ruined the mood of the piece. “How much for the painting?”

The woman appraised Isabelle’s worn leather jacket, peasant-style dress, and the small gold rings encircling her fingers. “$35,000 for this piece. I have smaller ones inside that might interest you.”

She opened the gallery’s door and gestured for Isabelle to enter.

“My name is Anita.” She held out her hand and Isabelle shook it with a light hold.

As quickly as she took Anita’s hand, she dropped it. The dealer’s heated flesh singed Isabelle’s icy skin at the mere touch. She rubbed her burning hand along the folds of her dress to no avail. Her hand throbbed as if she’d touched real sunlight.

Inside the gallery, she could detect the sweet iron smell of Anita’s blood mixing with her rose-scented perfume. She could hear Anita’s heart beat out a steady rhythm like the underlying bass in a song. Even the unmistakable smell of oil paint that filled the gallery wasn’t enough to cover the delectable scent and alleviate Isabelle’s sudden craving.

If she noticed Isabelle’s unease, Anita kept it to herself. The woman flittered around the open space, eager to point out to her potential customer the rising artist’s small pieces priced in the low thousands.

As Anita chatted, Isabelle distanced herself with the pretense of studying the artwork. She was old and with age came control. Why this woman caused her hunger to spike, her flesh to burn, Isabelle had no clue. Even the oil paint’s mineral odor gave her a euphoric burst that made her lick her lips and long to lick the canvas.

Isabelle jolted back from the painting at which she’d been staring with her nose inches from the canvas as if trying to catch the scent of cornflowers strewn about subject’s feet. She clenched her hands in front of her and proceeded through the modest gallery to examine the other pieces—from a distance.

Ten more hung throughout. All painted with the same richness as the one in the window but with varied themes. There were smaller pictures of flowers, larger pictures of landscapes, and many pictures of women—young and old, soft and hard, nude and fully dressed. Some paintings were of their faces only, while others showed the women at a desk or lying on a chaise or looking out a window. There were no pictures with men as the focal point. They were in the background or along the sides or sitting at the women’s feet.

They were used as props.

“Does he do portraits?” Isabelle asked. Maybe he could capture her in this light. Maybe in a painting she could appear alive.

“Nothing commissioned. He finds his own models” Anita put on her glasses to admire a portrait of a middle-aged woman’s delicate face half-concealed by a mane of black hair.

“He doesn’t like the models to find him.” She gave a dismissive wave of her hand. “You know how artists are.”

“Do any interest you?” Anita asked in a tone that assumed Isabelle would answer no.

“All of them,” Isabelle replied.

*As an Amazon Associate, J.T. Bock earns from qualifying purchases on the above Buy on Amazon link.