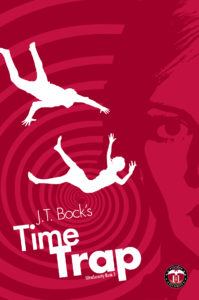 Kali Bordeaux considered herself to be part ostrich. She was certain of it. Her long legs, long neck, and tendency to bury her head during bad situations all pointed to her being related to the largest fowl.

Case in point: for the past three and a quarter weeks, she’d remained hidden inside DERST CEO Max Martin’s not-so-humble abode, avoiding the paparazzi that multiplied outside his estate like bunnies with big, pointy cameras—horny for a story.

If she squinted through the living room window and peered between the evergreens, past branches weighed down with snow, she could make out the electric blue Real Life Reality media van. It hadn’t moved since the night Max and Kali had disappeared when filming the web series’ holiday special at her mom’s house.

As far as Kali knew, no one had witnessed her popping them away, using her Quantum Transference ability (Q-T for short), and no one outside her work—even her family—knew about her ability to travel to an alternate universe (alt-jump). The cameras had caught them entering her mom’s study but not exiting. Most viewers theorized they’d used a secret passage to escape.

Her mother, Deandra Bourdeaux, C-list reality web star, was staying mum on Kali’s abilities, and she hoped it was because Deandra, her guests, and the production crew didn’t recall what happened after she’d followed Max into the alternate universe and the world reset.

Of course, there were the rumors splashed over the tabloids, speculating she was a transhuman (human with special abilities) after an intrepid web entertainment reporter uncovered that she worked for UltraSecurity (U-Sec)—a security firm that partnered with law agencies to solve transhuman crimes. They hadn’t yet pieced together that she was UltraAgent TimeTrap, which she found odd given the Internet gossip sites, but she didn’t care to tempt fate by questioning why. She knew it was only a matter of time before they ousted her.

Fortunately, she’d only worked a handful of jobs for U-Sec since she’d developed her powers, and had Q-T’d in front of non-transhumans (N-Ts) only a few times. Those who had witnessed her ability had to sign an NDA per her boss Pax. Considering his intimidating appearance and take-no-prisoners personality, no one had ever refused or broken the NDA.

She ran her hand across the glass wall. It tinted gray, cutting her off from the world and the world from her.

“Snap out of it, Kali. You can’t stay here forever,” she said, as she’d told herself each day since the Evil Incident occurred and sent her burrowing under Max’s high-thread-count cotton sheets.

She hugged herself to stop from shaking. The longer she stood facing the dull gray glass, the tighter she squeezed.

“You need to tell him about the inci—” she sputtered.

Clearing her throat, she tried again, “The inci—”

Alluding to it made her throat constrict as if she were allergic to the word, the idea. How could she give Max details of what she’d experienced in the other universe if she couldn’t utter the nondescript word “incident” out loud?

“Just tell him what you saw,” she whispered. “You can do it. For your own sanity, you need to.”

Kali spun around in her plush Star Wars Chewbacca slippers and strutted with as much confidence as the comfy yet unwieldy slippers would afford her to the basement door leading to his lab.

After several deep breaths, she plunged down the stairs past his formal family portraits, past photos of Max shaking hands with politicians that segued into ones of his father posing with Ronald Reagan and finally into black and white pictures of his grandfather standing between the Kennedy brothers. The photos’ eyes watched her descend, knowing her secret and judging—she was sure—her suitability for Max.

She reached the basement lab and paused. Her heart danced a jig when she saw him. Of course, it could be the fault of the Willie Nelson song he was playing that segued into a catchy fiddle-heavy tune by a band she didn’t recognize, but which she was growing to like.

Am I starting to enjoy country music?

“You got it bad, babe.” She shook her head and watched his fingers tapping across the keyboard of a laptop.

He sucked on his bottom lip, telling her that he was focused on the task. His light eyebrows were drawn down. Shoulders tense under his green hoodie, he hunched over his metal work table. He paused, cracked his knuckles then tilted his head from side to side, and cracked his neck.

He turned up the music, not noticing Kali standing there as she argued with herself whether to tell him about the Evil Incident or to make out with him. Because the latter would certainly relieve her tension. The former, not so much.

She took another fortifying breath then forced it out, blowing the bangs off her forehead. She would tell him. No matter what, she would force the words out. He had to understand why she was acting neurotic, clingy, agoraphobic. Why she refused to use her power for a quick pop to her condo to get toiletries and undies and clothes. Instead she wore his shirts and ordered personal items online. The one time they did leave his place, they used the underground tunnel that let out a half mile on the other side of this property to avoid the paparazzi, only to encounter them surrounding her building in downtown Baltimore.

If she would get over her dread and use her power, then she could transport herself anywhere in the world—or anytime in the past in a universe parallel to hers. No one had to know where she was. But she’d be alone because Max couldn’t leave his job right now—something about a project deadline or meeting or whatever. And she’d rather be with someone she trusted than alone. Right now, being alone would be the second-worst-case scenario.

The first . . . well, that had already occurred.

Max was in the small group of those she could trust. In fact, he topped the list, since he had been kidnapped by the same alt-traveling douchebag that had taken her.

Ready or not. Here I go.

She made herself take that first step toward Max. The second wasn’t as hard. Only fifty left to go.

*As an Amazon Associate, J.T. Bock earns from qualifying purchases on the above  Amazon link.